Currently listening to:You Are A Tourist by Death cab for cutie
Status:Reeeeeeally sleepy

Warning: This is going to be a Really. Long. Post. solely designed to lag up your computer (actually hopefully it wont lag that badly cause i paid for server hosting/space/etc) because 1. Lots of photos and 2. Lazy to collage them what you want.

Anyway yesterday after giving tuition in the morning and heading down to MJchoir to watch them sing, i met the PGC at IKEA for the shoot we’ve been wanting to do for quite some time. It’s modelled after an IKEA themed shoot we saw online but we’re not as…. uh. Focused. You can see our inspiration here.

Lets just say the PGC gets a little out of control when they see the camera.

Woo did i make you hungry yet?

We be Stoning at home watching teevee

In my best british accent: “Would you like some tea?”

Practising for my marriage to Prince Harry kthx.

Fake one lah sick where got so happy.

Suhaida and her malay family

Su giving her “i eating chocolate i am happy” face

Got photobombed by a cute kid

Looking appropriately guilty (complete with helpful arrow and all)

Testing out my remote control for the Kiss

Syaf looks surprisingly happy for someone caught in the shower

Check out my walk in wardrobe of HIGH HEELED SHOES

I am a Soccer Mom.

Pourin out a cup full of sunshine ~~

Okay it was also the last Saturday before the GBC’s enlistment so we went to watch them get their hair shaved at Parkway after that! (anyway GBC stands for Gay Boys Club (theyre not really but aiyah long story) and PGC stands for.. er.. Pretty Girls Club. WHAT DONT LAUGH OKAY NAME NOT I COME UP ONE.)

Check it out they still have hair

Not for long thought nyahahahahahah

Side by side for your comparison 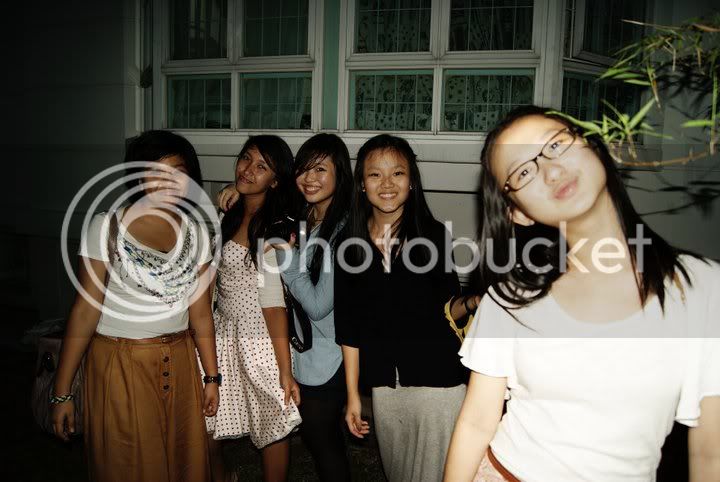 Woohoo GBC +PGC groupshot without random disappearing narnians and such!

Ne’er have i been so proud of my long hair.

It was clement’s birthday too so we went to his house to celebrate after- it was so lovely omg we had a garden party!!!!!!! There were balloons and hats and the ok idk what it’s called but you can blow it and it makes a loud noise and ICE CREAM omg we were as excited as little kids on christmas day

Garden parties!! We felt like we were in kindergarden again. There were actual balloons and everything omg omgomg so exciting 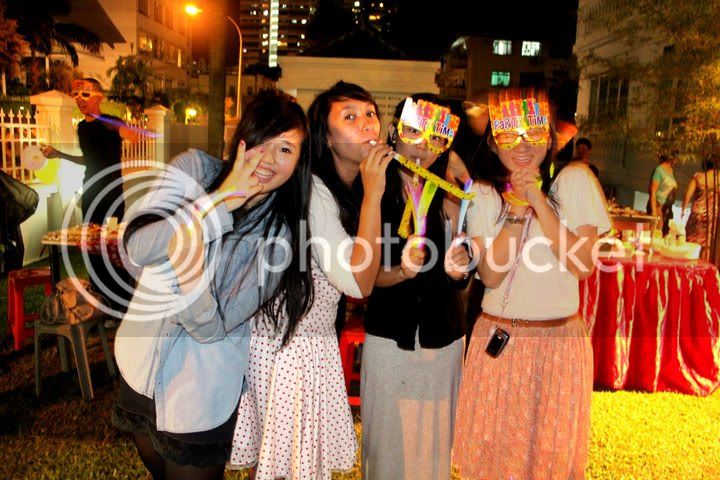 “Beer made this body beautiful”

So fierce for what.

Btw clement’s brother (the one who looks exactly like him except with hair) is my bby sister’s classmate. Sit next to each other in class somemore COINCIDENTAL OR WHAT.

It was REALLY fun ohmygoodness all these people, they are insane. They prance around and scare the neighbours and mistake trees for powerplugs. They overflow with excitement at the sight of balloons and icecream and checkered red table cloth.

The only dampener was that on the way home, four of us (Me Syaf Ranice Ern) were standing IN THE RAIN desperately trying to flag down a cab for FOURTY FIVE MINUTES. We were properly panicking at the time, it had been nearly an hour, we were girls with curfews and hello four girls why you dont want to pick us up not like we look like we wont pay or we will hijack your cab or we are drunk and will throw up in your cab right.

No instead we had cab drivers zooming past us who:

1. Leered at us
2. Stared at us and drove past
3. This one bugger actually rolled down his window and shook his cigarette butt at us while grinning
4. Plain ignored us.

May i point out that these cabs were EMPTY and it was RAINING. Have i mentioned yet that it was raining? And we were four young girls?

Thank God for Clement (rare gentlemen in the twenty first century) who called to see if we were back home safely (we weren’t) and ran out to find us (we had wandered off quite far searching for a cab in our desperation) and got his dad to drive us all home since he hadn’t taken his licence yet.

Photobucket is being annoying some of my photos disappeared after i uploaded them omg ugh. Forget it go have a look on facebook yourselves!
Rest of the photos here, i set privacy levels to “Everyone” because Syaf and Ranice too indie for facebook or something. Too many photos to upload we took like.. 600 photos the entire day. I had to split it into 4 albums.

Today: with Andz who’s similarly enlisting this week. In memoriam: his hair.

Stupid boy keep laughing at me because i was so sleepy and my eyes were so small today. (last night slept late reached home late re: cabs)

Oh okay anyway i did this personality test thing for fun (its from this girl whom i dont know but i stumbled across her blog once and started following it randomly causes she’s quite interesting- exo-thermique) and here’s what i got:

Thoughtful to the extreme, you are often obsessed with perfection and the rules governing your own personal interests. Your world is black and white. You love to work within a logical system, such as language, computer programming, or mathematics. Manipulating a system that can be completely understood is a distinct pleasure to you, because of your confidence in the underlying veracity of your belief system. Because of your appreciation for logic and order, those who speak or think in a sloppy manner are apt to generate more than their share of wrath. Although very amiable, you are not drawn to friendships out of a sense of personal need. You are just as happy by yourself with a good book or puzzle. Because you are so involved with thought, you will on occasion have difficulty dealing with the day-to-day problems of a normal life. Taking out the trash, doing the dishes, these are often left until the last possible moment, if at all.

*turns around* MOOOOOM. ITS MY INBUILT PERSONALITY I HAVE DIFFICULTY DOING THE DISHES. IF YOU MAKE ME DO THE DISHES YOU WILL MAKE ME FEEL BAD ABOUT MY DIFFICULTIES AND INHERENT DISABILITIES.

okay here you can try it too http://www.hypnoid.com/psytest2.html
Weirdest psychological test ever okay

Oh also THE ROYAL WEDDING was lovely ohmygoodness i loved the dress (Girls, conservative is classy re:Middleton) and the uniforms and the hats and the horses therefore I HAVE DECIDED that i am going to have a royally themed wedding. Forcing my husband to tailor make that uniform and all of you have to wear hats. You can call me princess. 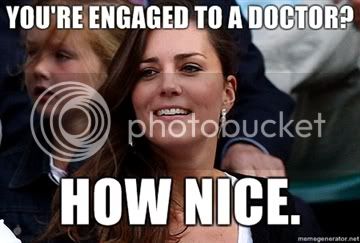 SIGHHHHH OMG SHE’S SO GOODLOOKING. K going to sit in a corner and be depressed now bye.